Putting the icing on the cake! 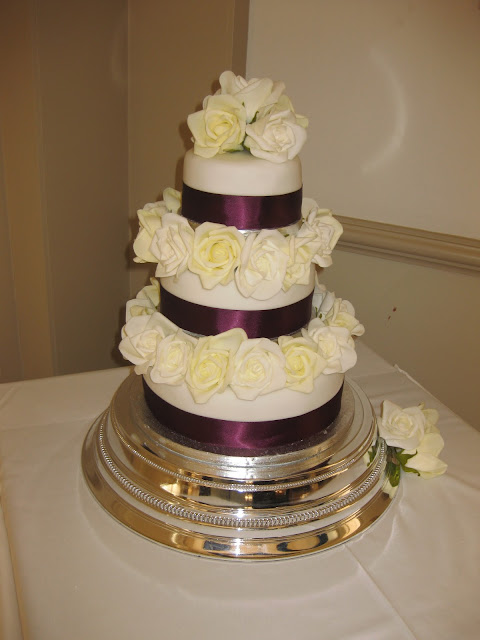 The excitement is mounting as we’re putting the final touches to the wedding preparations for my daughter and her partner. 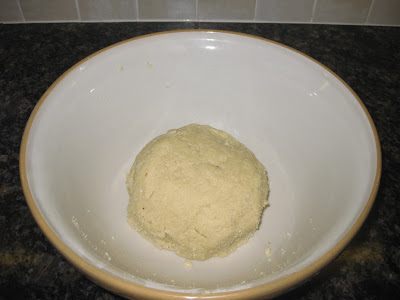 Almond Paste
My big task has been to make sure I got the cake ready. Last week, I covered the cakes with Almond Paste, and this week with fondant icing, wrapping maroon ribbon to match the colour of the bridesmaids' dresses around each of the 3 tiers. 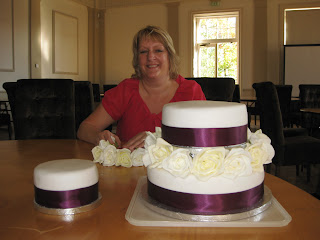 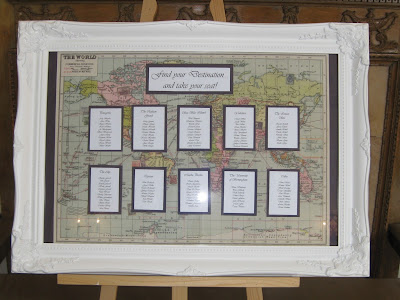 The bride and groom have chosen a travel theme for their wedding as they've done a fair amount of travelling around the world together. The table plan is a world map, the table headers are postcards from places they have visited and the place names for the guests are luggage labels. They’ve even chosen ‘One more step along the world I go’ to sing at the wedding service. 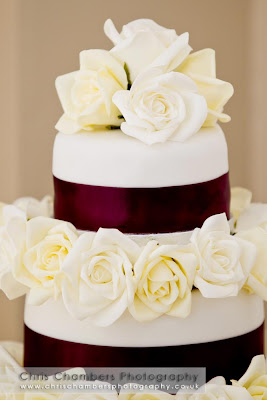 We’re all looking forward to a fabulous day. All our fondest wishes and congratulations to our lovely couple. Grandma Abson would be very proud that her family baking legacy lives on!
Posted by Meryl at Friday, September 30, 2011 No comments:

Email ThisBlogThis!Share to TwitterShare to FacebookShare to Pinterest
Labels: assembling the wedding cake, icing on the cake, realistic cream roses 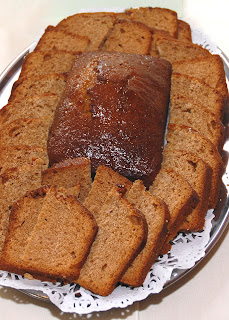 Marmalade spice cake
I’m passionate about sharing Grandma’s skills and expertise which she passed on with the legacy of her delectable collection of 200 recipes in Grandma Abson's Traditional Baking so I’m doing talks, book signings and demonstrations about Grandma’s baking. Read about them on my Events page.

The first  of these was at Furlong Road Methodist Church in Bolton on Dearne, South Yorkshire where Grandma spent most of her life. It was brilliant to talk to the group about Grandma’s life in the village. It all set them reminiscing and quite a few of them remembered Grandma and her baking. I took along the Marmalade Spice Cake which they loved. We talked about ways of helping the next generation learn how to use simple ingredients to make good food for their families. Grandma’s baking has lots to offer as her skills were honed over the twentieth century often in times of shortage during rationing in the first and second world wars and the depression in the 1930s. 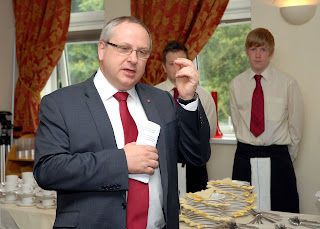 John Foster of Fosters Bakery in Barnsley says that what he loves about Grandma’s book is that her appeal is not just about yesterday but it's for today and tomorrow. Grandma’s recipes celebrate our baking heritage and are highly relevant for us now and in the future with increases in the prices of foodstuffs and energy. He is very clear that we need to make tasty food with simple ingredients once again. 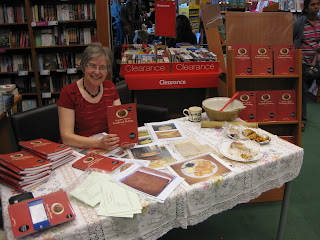 Last weekend, I was signing books and sharing cakes with the customers at Waterstones, which was great fun. Everyone tells me an anecdote about their Grandma’s baking so I'm starting Grandma’s traditional baking revolution!
Posted by Meryl at Friday, September 23, 2011 No comments: 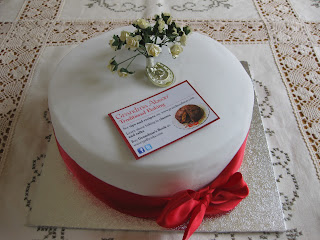 A special wedding gift
A few months ago, I made a special Wedding Cake  and gave a copy of Grandma Abson's Traditional Baking book for a family friend to take as a wedding gift for a famous couple, Justine Thornton and Ed Miliband. Ed is the local MP in Doncaster.  I decorated the cake with red ribbon and put a spray of delicate white Yorkshire roses, tied up with a horseshoe. 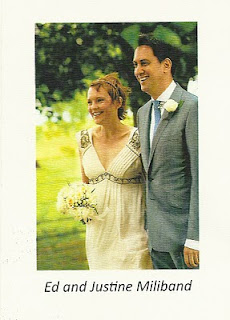 I was delighted to get a lovely message back from Justine with a lovely thank you card saying ‘We've started eating the cake and it is fantastic!’  I hope they are doing plenty of Grandma Abson’s baking in the Miliband household. 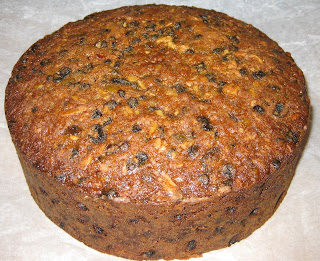 We’re all getting excited about my daughter’s wedding next month and yet another outing for Grandma Abson’s Celebration Fruit Cake recipe. As you need to prepare a wedding fruit cake in advance, I've baked the three tiers and these are now maturing. Once a week, I prick the tops of the cakes and pour a few teaspoonsful of brandy to help the maturing process. During the next couple of weeks, I’ll need to cover the cakes with home made almond paste/marzipan. 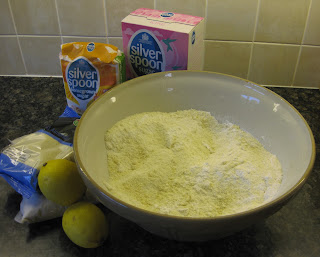 Mix the almonds and sugar together. Add sufficient liquid to make a stiff  paste. You can also add a 1 tablespoon of sherry instead of 1 of the water. You can also substitute half of the caster sugar with icing sugar. 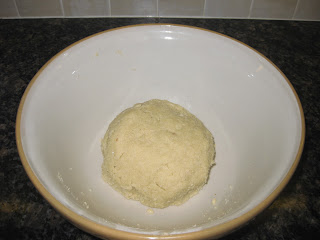 Almond paste ready to put on the cake
Posted by Meryl at Friday, September 16, 2011 No comments:

Grandma’s baking is a hit with the hens 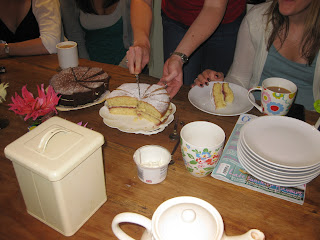 Afternoon tea with the hens
I don’t remember Grandma ever saying she had been to a 'hen do'. My daughter’s bridesmaids had organised a secret weekend away to celebrate her final weeks of singledom. The destination was a farmhouse on the outskirts of Bath - an idyllic venue for a hen party!

On the first evening, we got dressed up in our best togs for dinner with a glass or two or fizz. After the meal, I got out my saxophone for the girls sang along. It was a great success and one of the girls said that this was the first hen do she been to with a family band!

I’m not quite sure what Grandma would have made of the next day, as we set off to do Burlesque Dancing. The hens got dressed up appropriately with basques, black stockings and suspenders and with teacher, Rachelle’s encouragement learnt the steps to become dazzling Dancing Divas.

After lunch, it was back to the farmhouse and another occasion to celebrate - my niece’s birthday; we'd made a couple of traditional cakes from Grandma’s book : Victoria Sponge and Chocolate Cake and had afternoon tea around the farmhouse kitchen table. 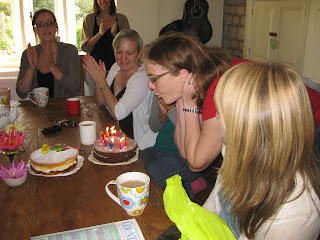 Blowing the birthday candles out!
I left for the drive home while the girls got ready for their evening’s partying with a cocktail making session, tapas and the Bath nightclubs. So, huge thanks to my daughter for asking me along and to all the girls for being so welcoming. I’m really looking forward to the big day soon. Now to get cracking with the wedding cake!

Let’s hear it for lemons 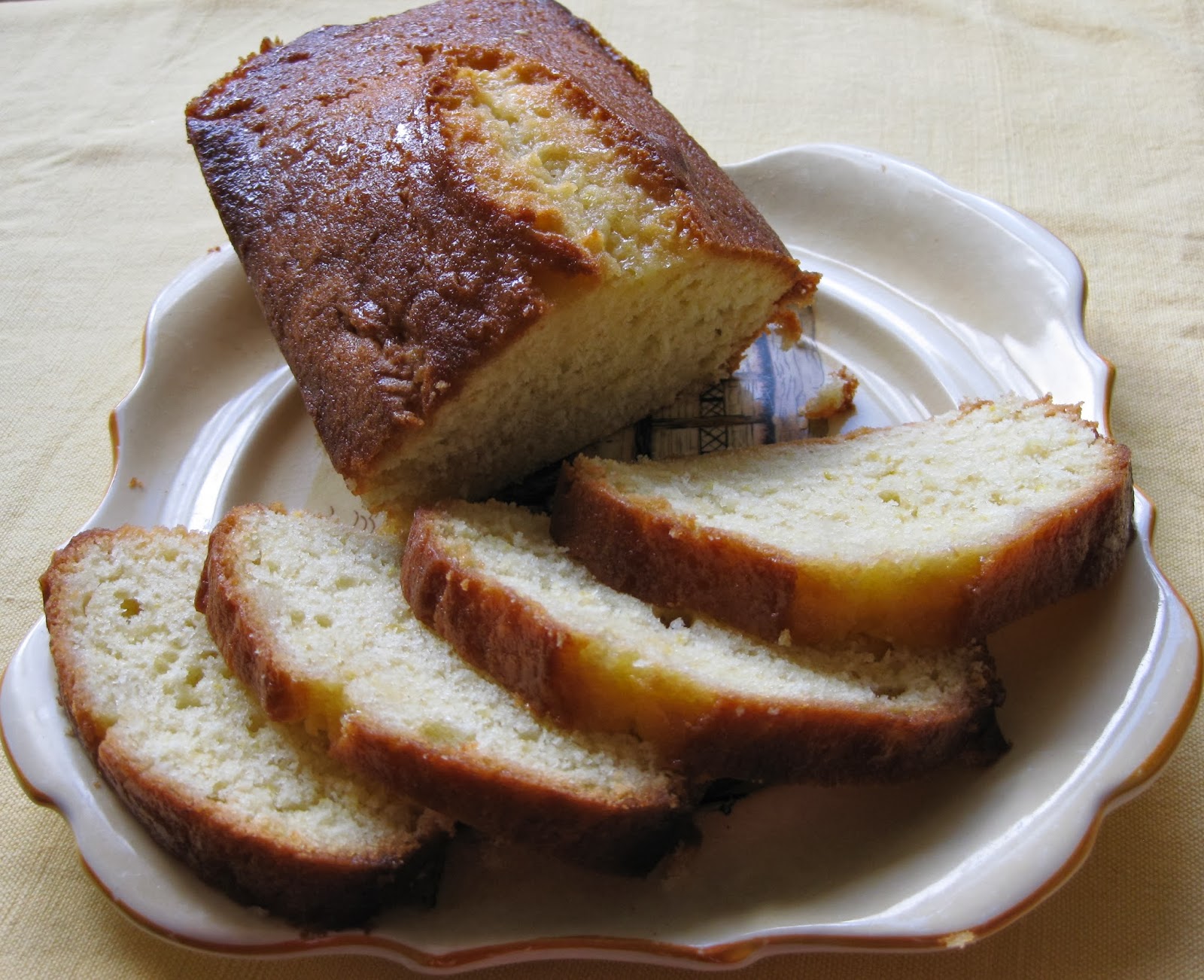 Tangy Lemon Loaf
Lemons are pretty underestimated in the baking world. When I was sorting through the recipes Grandma had cut out from magazines, I found one for a really tangy Lemon Loaf. I’m not sure which magazine it came from but Grandma Abson was an avid reader of Woman's Weekly. Once the Monday washing had been done, she would treat herself to a sit-down to catch up on the romantic serials as well as the more practical knitting patterns – we had a whole wardrobe of hand knitted woollen jumpers, gloves, hats and scarves.  The recipes would be cut out and saved to try out later. 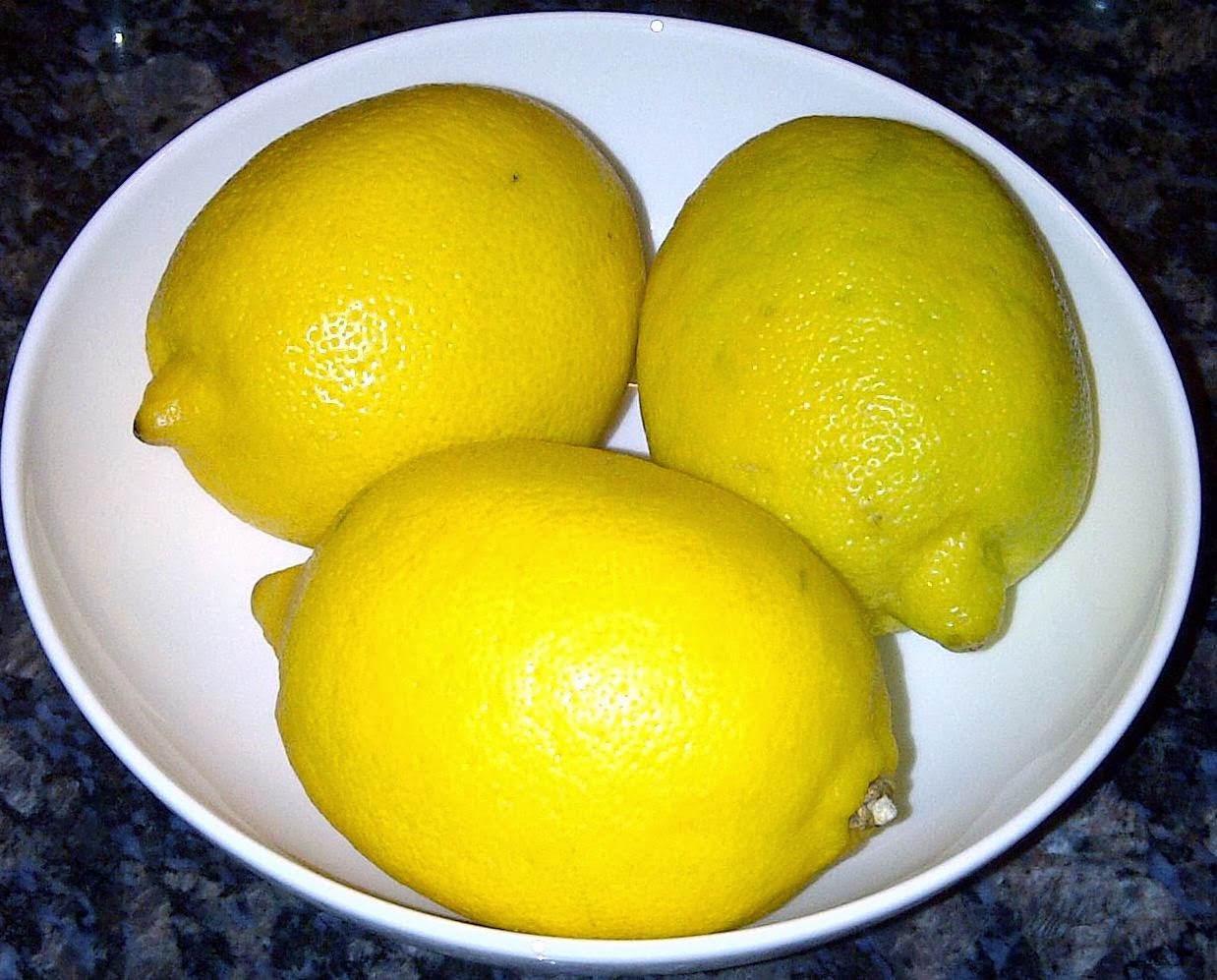 Cream the butter, castor sugar and lemon rind until pale and fluffy. Gradually beat in the eggs. Mix in the flour and a little milk to soften the mixture so it drops off the spoon. Grease a 1kg/2lb loaf tin. Bake in a moderate oven (Mark 4, 350F, 180C) for 45 minutes until risen and firm on top. Prepare the lemon syrup by heating the lemon juice and granulated sugar until the sugar is dissolved. Once the cake is out of the oven, pierce the top with a cake skewer and pour over the lemon syrup. Leave the cake in the tin until cool. 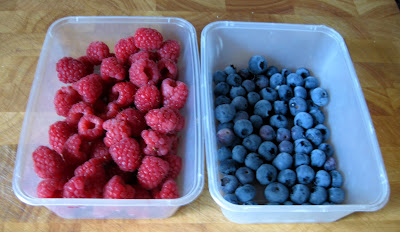 This is a great recipe to serve with a bowl of blueberries and raspberries. The lemon syrup gives it really tangy and intense flavour - just the thing for a late summer’s afternoon. 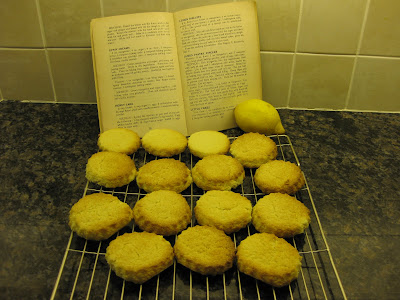 And here’s another great recipe for Lemon Biscuits.
Have you got a Lemon recipe to shout out?
Posted by Meryl at Friday, September 02, 2011 No comments: