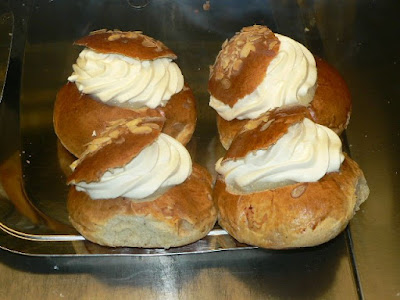 Shrovetide is a wonderful time to visit Finland, when you can delight in scrumptious cream sleigh buns called Laskiaispulla. Laskiainen is the season associated with Shrove Tuesday which heralds the beginning of Lent. In Finland it’s often described as a ‘sledging or sliding’ festival when families enjoy the snow and sun after a hard winter. After spending time sledging outside, it’s customary to serve pea soup with ham and cheese with sleigh buns or pancakes to follow as a dessert.

These mouth-watering soft cinnamon buns have a sweet filling of whipped cream with strawberry or raspberry jam or almond paste. They became popular from the 19th century onwards.

What you need
For the dough:
250ml milk

Warm the milk to 37C. Place in a large bowl and mix well.  Whisk in the vanilla sugar, salt, and cardamom. Stir in the flour gradually to make a dough and knead it until it becomes elastic. Add the butter and continue to knead for about five minutes. When the dough has formed a smooth ball, place it in another greased/oiled bowl, cover with a towel and leave in a warm place to rise for about 30 minutes. The dough should double in size. Put the dough onto a well-floured surface. Cut pieces of the dough and shape into round balls. Place them onto a baking tray lined with baking paper. Cover the buns with a towel and let them rise again for 30 minutes.

Preheat the oven to 200°C. Whisk the egg and brush it on the tops of the buns. Sprinkle granulated (or pearl) sugar or chopped almond on top if desired. Then bake the buns for 10-15 minutes until golden brown. Allow to cool.

Whip the cream with the icing sugar (reserving a little to sprinkle on the buns later). Slice the buns and fill with cream and strawberry or raspberry jam or almond paste. Sprinkle icing sugar on top if desired.

And if you enjoyed these, here's another Finnish recipe for Runeberg Cakes which are a favourite of ours.