The Cabinet of all Puddings 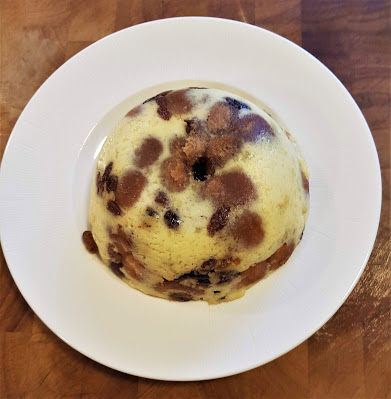 Will it be forever etched in your brain ‘Where was I when Boris Johnson made his resignation speech’? If truth be known, I was sharing a sandwich outdoors with my friend Pam, when she propped her phoned up on the table to hear his message. ‘What could I possibly bake to celebrate this long-awaited event?’ I mused.  In an instant, she replied ‘Cabinet pudding!’. 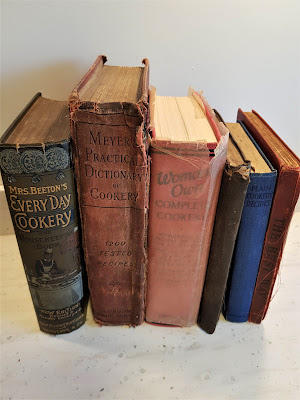 So here I am researching all my old cook books for this long-forgotten dessert and its origins. Also known as ‘Chancellor’s Pudding’, Cabinet Pudding appears to have originated in the early part of the 19th century. The recipes vary but they are generally made from a combination of sponge fingers or cake, soaked in custard, often with Ratafia or Amaretti biscuits, cooked in a buttered basin with a combination of dried fruit such as raisins, cherries and apricots and served with a sweet sauce or custard. They range between a rich tipsy version with fruit soaked in rum or brandy and plainer varieties with less fruit and bread (even stale bread is considered), making it a close relative of Bread and Butter Pudding. 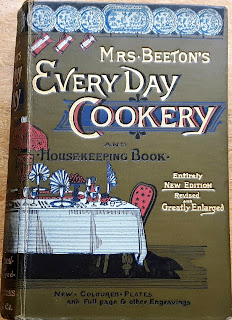 A quick check of Mrs Beeton’s ‘Everyday Cookery’ from the Victorian era shows her preference for candied peel, currants and sultanas alongside sponge cake, whilst ‘Meyer’s Practical Dictionary of Cookery’, published in 1898, gives two options, a plain version and a richer one with raisins, sultanas, glace apricots, angelica and brandy. 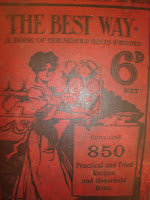 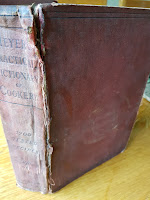 Grandma Abson’s copy of ‘The Best Way’ 1907, boasting 850 Practical and tried recipes and household hints, was most likely her ‘go to’ manual when she was ‘in service’. It favours a plainer version with ‘a quarter pound of bread crusts’ and relies on ‘twelve drops of vanilla essence’ to add flavour. This version is baked in a ‘slow oven for one and half-hours’ unlike others which are steamed. 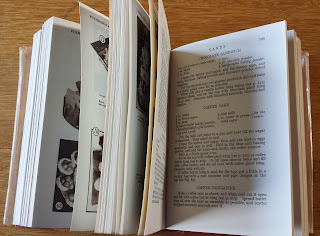 I decide to try out Cabinet Pudding from the Woman’s Own ‘Complete Cookery Book’ compiled in the 1930s, since the ‘straightforward and easy to follow’ recipe seems to be a good option for someone who has never made this before.

Rum or Maderia (I used brandy) 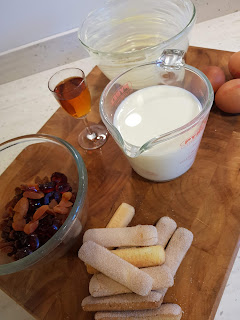 Put the sultanas and cherries (and apricots) in a bowl with a little rum or madeira (or brandy) and let them soak stirring them well with a fork. Butter a pudding basin and sugar it. Then line the bowl with sponge fingers cut up in pieces; arrange the remainder in alternate layers with the cherries and sultanas and sugar. Make a custard with the milk and eggs and pour in slowly, so that the fingers are well soaked. Steam for 30 minutes and serve with custard or any sweet sauce. 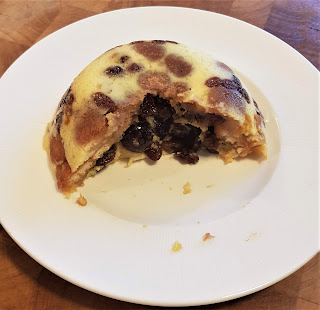 My neighbour, Iona happens to pop round between calls just as I was turning it. She does the honours with a taste testing session with her elevenses. Verdict ‘It’s a little bit bread and butter pudding with the custard and fruit and super boozy!’

Puddings like this are completely out of fashion these days but even if you don’t fancy it steaming hot, we found out later that it is tempting when cold and served with ice cream. If you’re going to be ‘ambushed by a cake’, make sure it’s this one. It’s also a perfect way to recycle any booze left over in a suitcase or the new fridge!