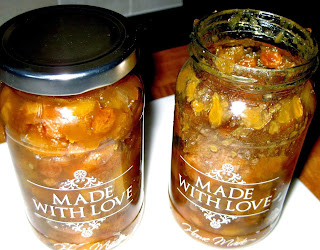 Spicy Apple Chutney
With more of us interested in growing produce, there’s always the age old problem of what to do with gluts of fruit and vegetables. Grandma never had a problem with what to do. She often made chutneys and pickles to last through the winter as a perfect side dish with hot and cold dishes. 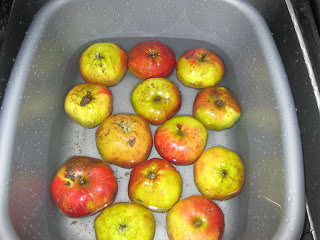 So, when I was given a bag of ‘fallen’ apples, I dug out Grandma’s Apple Chutney recipe. Grandma served this spicy chutney with pork pies and cold meats at Christmas. 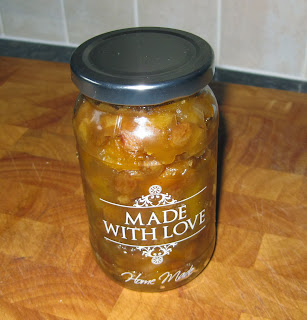 
Chop up the apples, onions and apricots. Add the other ingredients and mix together. Place in a large pan and bring to the boil. Simmer for about 1½ hours, stirring until the ingredients are tender. Allow to cool. Spoon into clean jars and cover. 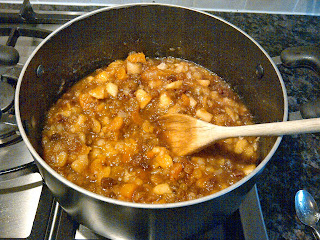 Simmer the ingredients
Grandma’s tips : Chop the fruit and onions finely or put them through a mincer so the final consistency of the chutney is thick and smooth. To test if the chutney is ready, draw a wooden spoon across the bottom of the pan. If it’s ready, the chutney must not flow back into the gap left behind by the spoon. If not, then check every 5 minutes or so until the gap is clear. Chutney needs to cool slowly so the spices infuse and flavour the fruit. You can add more ginger and other spices such as mustard seed, coriander or cumin to make it even spicier. 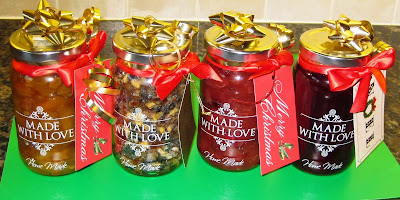 A gift of homemade Chutney
You could pot it up with decorative ribbon as a homemade present for friends and family!
Posted by Meryl at Thursday, October 24, 2013 2 comments: 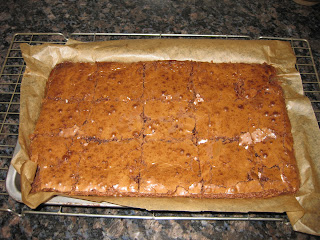 Chocolate Brownies a la mere Bailey
Chocoholic Sara is one of my friends from our Leeds University days where we studied languages. From time to time, we meet and have fun reminiscing as if it were yesterday. We still feel 19 years old in our heads!

Sara is a keen baker and regularly sends me recipes. She writes “I discovered this recipe - now called 'Ma Bailey's Brownies' - when my boys were at school. The tradition continued and I made them each time they set off for university and for each visit during the term. The chocolate chunks stay sort of gooey in the brownies. These brownies have also been to Ireland, Lapland and Iceland. I am trying to see how far round the world I can get them!"

Preheat oven to 180C, Gas mark 4. Line a baking tin 18cm /7" square with greaseproof paper. Melt the butter with 50g/2oz of the chocolate in a heat proof bowl over a pan of hot water. Put sugar, eggs and vanilla essence into a large bowl, then sift in flour and baking powder. Stir in the melted chocolate and mix well. Chop the remaining chocolate into rough chunks and stir into the brownie mixture. Spoon into the tin, spread evenly and bake for about 40 minutes until the cake begins to shrink from the sides and the centre is firm.

Sara’s baking tips :
"Melt choc in microwave then add butter and CAREFULLY finish melting them  together. Today's bake took an extra 10 minutes but has been known to be longer so don't panic! I cut the pieces in half again as it's rich and is for sharing! I still work in ozs but for the first time I just followed the metric today. These homemade brownies are really easy - the hardest part is waiting 40 minutes for it to come out of the oven!” 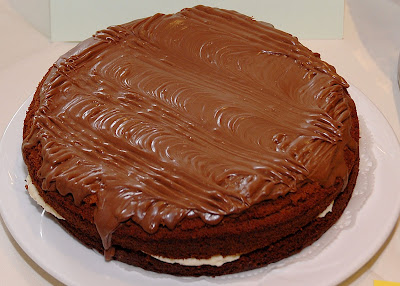 Thanks, Sara. We did and they are chocotastic! I hope they go round the world as you said!  It's Chocolate Week so check out all Grandma's Chocolate Recipes  from biscuits to cakes which one are you baking this week?
Posted by Meryl at Sunday, October 13, 2013 No comments:

Of Rice and Romans 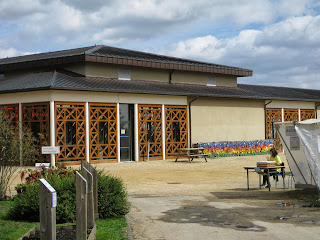 Being interested in all things Roman, I was delighted to chance upon an amazing archaeological site in the village of Vieux La Romaine in Normandy, France. Our visit coincided with ‘Les Journees du Patrimoine’  September Heritage weekend and a special ‘Salon de The’ was put on by the members of the ‘Comité de Jumelage de Vieux et Otterton’. A tempting array of savoury and sweet flans were on offer to visitors, all served up with a smile and a cheerful explanation of each dish. 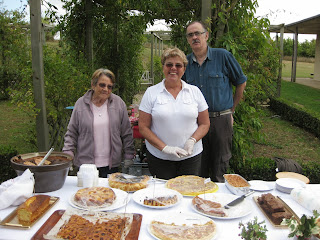 Most impressive was the famous local Norman speciality -  La Teurgoule – a rice pudding flavoured with cinnamon. It’s absolutely stunning to taste. The ladies explained that they make it in a large pot for special community festivities and the crusty topping is the best bit! Here’s the recipe for a smaller family celebration. 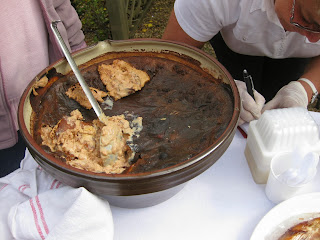 La Teurgoule
600ml/1 pint milk (whole not skimmed)
75g/3 oz pudding rice
2 tbsps sugar
1 tsp cinnamon
Knob of butter
Grease an ovenproof dish with butter. Mix the rice, sugar and cinnamon in the dish. Add the milk and stir around. Dot the top with butter. Place in a preheated oven (150C/Mark 2/300F) for about 3-3 ½ hours. Test with a knife to see if the mixture has thickened and is creamy. Allow to cool and serve ‘tiede’ i.e. warm

Meryl says : This recipe reminded me so much of Grandma Abson’s luscious rice pudding slowly cooked in the coal oven range. We loved scraping the crusty bits around the edge! 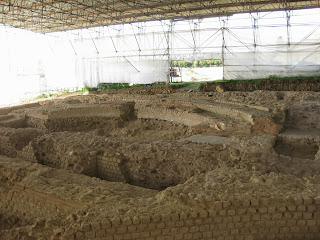 If you have ever wanted to imagine life in the Roman Empire, then this place is a ‘must see’. The Head of Archaeology and her small team of experts and volunteers are doing a fantastic job. With 3 major excavation sites, as well as a well designed museum containing a huge amount of artefacts, this location deserves a must see place on the Roman archaeology trail.