Queen Cakes fit for a Queen 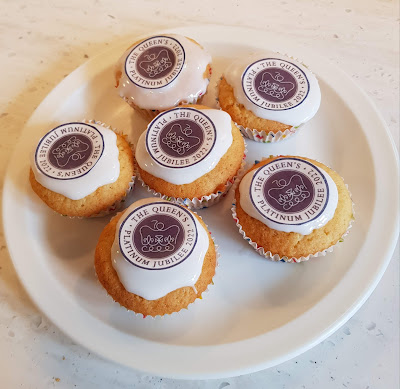 Platinum Jubilee Queen Cakes
‘What are you baking for the Queen’s Platinum Jubilee?’ Maybe the  Platinum Jubilee Pudding if you fancy a trifle? Queen Victoria obviously loved the Victoria Sandwich and in 1953 Coronation Chicken was created to celebrate the coronation of Queen Elizabeth II. It hardly seems 2 minutes since we were ringing out the bells for the  Queen's Diamond Jubilee in 2012!

I’ve always been intrigued by Queen Cakes which are small fairly dense small cakes or buns (as we call them in Yorkshire), which have currants and a citrus flavour. They are said to originate from the time of the Stuarts, Queen Mary (1689 to 1694) or Queen Anne (1702-1714) and could be considered the forerunner of the ubiquitous cupcakes we enjoy today.

The earliest known recipe is said to feature in ‘Court Cookery’ by Robert Smith, published in 1725. This recipe isn’t too dissimilar to Yorkshire cook, Elizabeth Moxon’s Portugal Cakes with butter, sugar, flour, sugar, eggs and currants as common ingredients. For her ‘Queen Cakes’ recipe, she suggests in English Housewifry (1764) that “…you may ice them if you please, but do not let the iceing be thicker than you may lie on with a little brush.”

Over the centuries other creative cooks added other flavours to these little cakes with rose water, mace, orange water and nutmeg being popular additions. Early Queen Cakes were probably made in small tin or stoneware patty pans like those we use for mince pies, but by the mid-18th century, specific Queen Cake pans were available in a variety of shapes such as hearts or diamonds.

Eliza Acton in her book ‘Modern Cookery for private families’ (1845) suggests making a mixture as for a pound cake then putting it into small well buttered tins and baking in a brisk oven. Mrs Beeton in her widely reproduced ‘Book of Household Management’ (1861) gives a recipe for 2 or 3 dozen cakes with the addition of cream and essence of almonds or lemon to give us a richer version.

Here's my Grandma’s recipe which she made from time to time as a weekend treat. Her preference was for a lemon flavour.

a few drops of lemon extract

Arrange 16-20 baking cases on a baking tray. Beat the butter until soft. Add the sugar and cream together until the mixture is pale and fluffy. Add the eggs (well beaten) gradually. Fold in the flour and salt. Then, stir in the fruit and lemon extract. Add the milk. Put the mixture into the baking cases and half fill them. Bake for 15-20 minutes in a fairly hot oven. (375F, Mark 5, 190C) You can brush over the top with egg and place a small piece of lump sugar over each one. 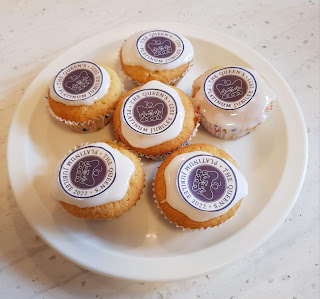 After 70 years of her historic reign, Queen Elizabeth II is the first British Monarch to celebrate a Platinum Jubilee. Enjoy the Jubilee Bank Holiday weekend from 2 to 5 June. I’ll be baking a batch of Queen Cakes for our Jubilee Street Party and following Elizabeth Moxon’s suggestion for icing so I can top them with a rice paper Jubilee Crown – a 21th century version.