Brightest and Best of the mince pies 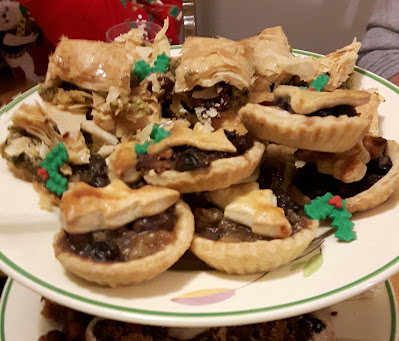 Carol singing round the village

Whenever I see a mince pie, I always think of carol singing. Every Christmas Eve, from about the age of twelve or so, I was allowed to go out with our local Church Choir and sing carols around the small mining village in South Yorkshire where we lived. It was magical. Wrapped up in coats, hats, gloves and scarves, we went from street to street and our voices soared in harmony and cut through the cold air.

Our last call was always the Railway Station at around about 10.00 p.m. We lived in the Station House so I was home. Grandma would have warm mince pies which she’d baked earlier in the day in the top warming oven of the cream coal-fired range. The smell of the spices in the mincemeat wafted over you as you came into the house. We always performed Grandma’s favourite carols before we were allowed to tuck into her mince pies. The first was the rather mournful ‘Cradled in a Manger meanly’, a carol much loved by Methodists. The second of her favourites was the more rousing ‘Brightest and Best of the sons of the morning’. The words ‘Dawn on our darkness and lend us thine aid’ no doubt having a strong resonance for many in the village who had lived through the bleakness and deprivation of the twentieth century. Only when we had finished did Grandma lift the mince pies out of the oven and we were treated to hot tea and those mouth-watering marvels.

Why are they called mince pies?

Food such as Mince pies served during the Christmas period often have symbolic meanings. Just as their name, early mince pies were meat based and filled with lamb, with added spices and fruits. They were made in an oval shape to represent Baby Jesus in the manger with the lid representing his swaddling clothes. Although in the 1850s, cookery writer, Eliza Acton’s recipe for mince pies still contained three tablespoons of diced beef, the recipe had already begun to change to something sweeter and reduced in size to a small round shape. Duncan Mcdonald in his ‘The New Family Cook Book (1809) contains an early meatless recipe with apples, lemon, orange and spices. Cooks at this time often made mince pies using puff pastry instead of shortcrust. Here's  Grandma Abson’s recipe for homemade Mince pies

Grandma would cut out the round shapes for the baking tins, filling the pies with mincemeat before putting traditional lids on top and brushing them with egg wash for a shiny top. Nowadays, I like to decorate my mince pies with shapes –Christmas trees, stars and bells. Whatever you do, put plenty of mincemeat in.  Cook in a warm over (about 190 degrees) for 15 minutes. A final touch, once they are cooked, sprinkle a little icing sugar over the top.

Go with the tradition and eat a dozen

There is a tradition of eating one mince pie each day over the 12 days of Christmas from Christmas Eve to 5 January. This was believed to bring good luck and happiness for the next 12 months. I’ll be baking a batch of mince pies to treat my family and friends and even indulge in a spot of carol singing, remembering the brightest and best of Grandma Abson’s mince pies.

Happy Christmas to you all!🎄⭐