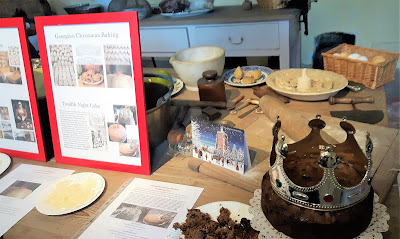 Christmas celebrations in Georgian times featured Twelfth Night Cake, a rich fruit cake which was eaten on the feast of the Epiphany on 6 January. Visitors to the Georgian Christmas at Cusworth Hall Doncaster didn’t seem too keen to wait till January to taste this scrumptious cake, so they had an early taste in the Great Kitchen, along with other Georgian Christmas Baking treats. I’d adapted a recipe from John Mollard’s 1803 edition of ‘The Art of Cookery’ . 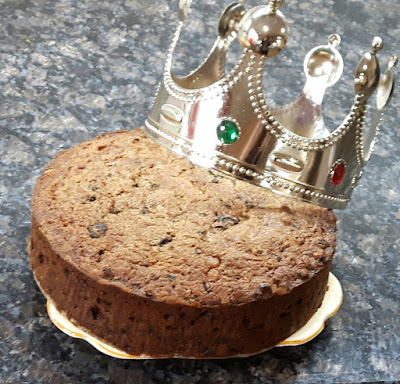 Preheat the oven to 160℃/325F/Gas 3. Line a 20 cm/8 inch round cake tin. Cream the butter and sugar together until light and fluffy and mix in the treacle. Whisk the eggs lightly and then add them gently to the creamed mixture, followed by the flour and spices. Stir in the dried fruit, mixed peel, cherries and ground almonds and mix well. Then place the mixture into the cake tin. Bake in the centre of the oven for about 1½ hours until the cake is firm and a cake skewer inserted into the centre comes out clean. Leave the cake in the tin until cool then turn out and cover with foil until ready to decorate. The cake can be decorated with marzipan and royal icing or left plain as desired.

It looks and tastes a lot like Christmas Cake but there’s an important difference. It was the custom to bake a dried bean and pea in each side of the cake and serve the cake in two halves one for ladies and the other for the gentlemen. Whoever found the bean and the pea became King and Queen for the night. 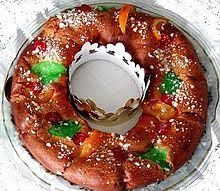 We had some visitors from Spain who told us they had the same tradition with the bean in their splendid ‘Roscon de Reyes’. 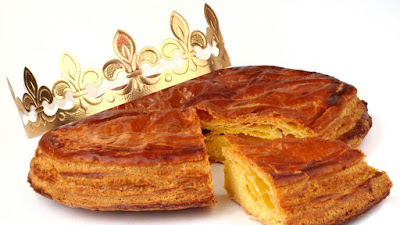 I’ve tasted the magnificent ‘Galette des Rois’ which is an almond cake made with puff pastry which also has a (ceramic) bean baked inside. 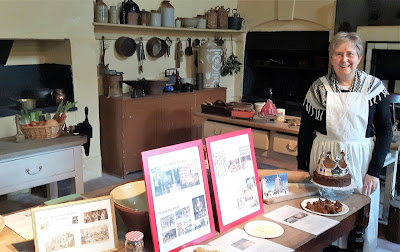 It was thumbs up all round for the Georgian Twelfth Night Cake. I think the Georgians had the right idea just like our Spanish and French friends to round off the Christmas celebrations with this great tradition. Once the wrapping is recycled, the decorations taken down, and the Christmas lights switched off, throw off the gloom of January with a piece of Twelfth Night Cake. Good luck -you could be a King or Queen for the day!
Posted by Meryl at Tuesday, November 28, 2017